Richard and I met on an airplane. I had put an “occupied” sign on the seat next to me because a friend 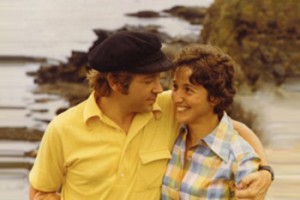 of mine was a standby, and I was saving her the seat. Richard asked if the seat was taken. I said “sort of.” Without asking me what I meant, he decisively sat down.

During the two-hour flight, chemistry took hold. I found him handsome, smart, sweet and funny, so without any reservation that I recall, I gave him my phone number. Richard ordered a Manhattan to drink. I never ordered drinks anywhere, but I ordered a Martini to impress him; after all, he told me he was five years older than I was, and I had never dated someone from the Mid-West.

When we arrived at Logan airport, I forgot Richard’s first name and introduced him to my father as David! Forgetting his name did not make a positive impression on a Harvard-trained psychologist. I smiled and said good-bye. When Richard tells our story, he says that when he got home, he called his friend to tell him he met someone he liked on the plane and that he wanted to call me right away. His friend persuaded him to wait one day.

The next day, Richard called to invite me to the ballet, but I felt that was too expensive a first date for a graduate student so I suggested going for coffee and to buy my father a birthday present instead. Today, Richard says that he thought that was the sweetest gesture he had ever heard, or the most manipulative to get two dates. Our second date, we went to the Kirov ballet, and one year later we were married.

Finding the love of your life combines strategy, thoughtful gestures, faux pas, flirting, and luck, just to name a few variables. Most of all, meeting and falling in love is about being open to new possibilities so that the chemistry – the magic – can happen. How I met my husband is a constant reminder that love comes in unexpected packages at unexpected moments.

← Back to learn more about the rest of our team