In a conversation with a lovely female client (let’s call her Nancy), I asked about her current dating activity. After many years of a loving marriage, this woman lost her husband to a difficult illness. Not having dated in many, many years, she courageously ventured into the often-frightening waters of the online dating world.

Because she is charming, witty and intelligent, it didn’t take long for an attractive gentleman to contact her.  They went out three times, and even though this was her first dating experience, she was encouraged and looking forward to seeing him again.  “I’ll be in touch,” he said, “as soon as I get back from Maine where I have to take care of a couple of things.” A week passed. No word. Another week. Still nothing.

Somewhat incredulous at the abrupt disconnect, our conversation took the turn such events often evoke: I asked Nancy, “Did you enjoy your dates?” She replied, “Yes. So why didn’t he call me?” What did I do wrong? Was I too forward when I suggested he come for an out

door barbecue? Did I sound too desperate – even though we had gone out three times and enjoyed long conversations and a good time.”

Clearly crestfallen, Nancy was in the position many older adult daters face – women who wait for men to call when they say they will. Of course, this response occurs no matter what the age, but for older adults who can be particularly vulnerable just learning the “rules” of dating in 2017, this experience often precipitates feelings of failure or inadequacy.” “Maybe he’s found someone else and is going out with her already.”

The truth is that guys don’t usually tell women why they are not calling. It may be a crisis in his family or his business or something you know nothing about. If you are married or in a long-term relationship, it’s a given that you tell your partner why you can’t make a meeting time, or when you will be late, or not home for dinner. When dating, however, it’s unusual for someone (usually the guy) to say, ‘Hey, Nancy, sorry I won’t be in touch for a while.  We just had a flood at the office,” or something to that effect.

Maybe he thought he was more ready for a relationship than he was, and needed some time to reflect, and wasn’t sure how to talk about how he felt.

This is a clear case of how expectations can disrupt confidence and interfere with relationships. You expect to hear from someone you like and be notified of plans. It just doesn’t always happen that way, and you must guard against self-blame and unrealistic fantasies. Easy to say. Hard to do. No one likes rejection or anything that approximates that awful feeling. But the truth is often worth waiting for, and without the facts, rather than speculate on the worst-case scenario, remember that the fault, if there is any, is unlikely yours.

As an older adult, if you continue to date with growing self-confidence, you will continue to attract good men. Not calling back does not define a guy’s personality and does not mean he’s not a good guy. You don’t know why he didn’t call. You may never know. One client told us it took

three months for a guy with whom she had a few dates to call her again. He suggested they meet and talk. She agreed. He explained that he was afraid she was looking for someone more outgoing than he was and she expressed her disappointment about not hearing from him. This real conversation about feelings marked the beginning of a long, loving relationship. They’re still together, years later.

Nancy ended our conversation with the positive thought that, “Well, at least I did get a chance to get started dating and found out that I can be attractive to men. Oh, and I did get an email from another man who loves the same music I do. He liked my profile and said he would like to meet me, so I sent him a note suggesting we get together. I’ll let you know how it goes…”

We want to hear from you – about your dating experiences during this time of COVID. There is a myriad of ideas, suggestions, advice from experts, professionals, and more, available online, in Zoom calls, and in socially distanced coffee shops.

But the real experts are you! 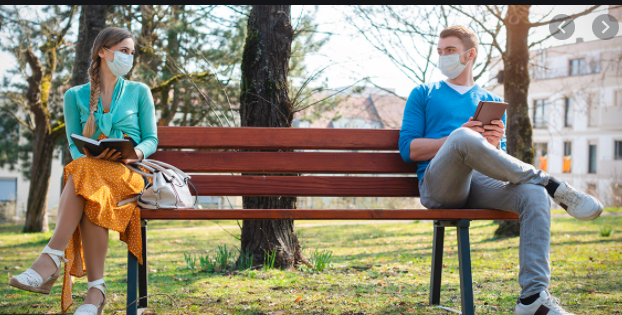